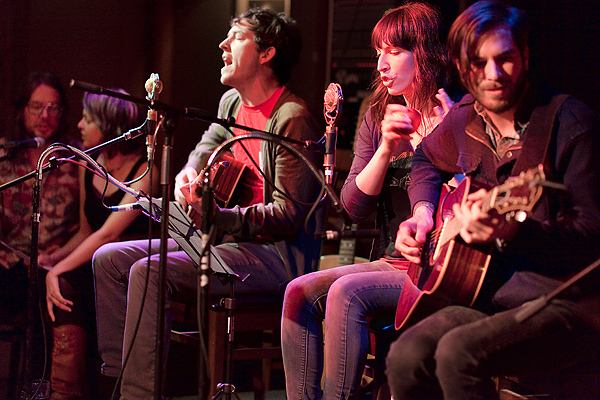 Last week’s podcast with Philip Graham revealed some of my misconceptions about condenser microphones being a bad choice for live sound. Most sound engineers and musicians are so used to close miking with dynamic mics like SM57s that they don’t really know how to use condenser mics for live performances. I know that I’m guilty of this, but many situations do not require close miking and actually would sound better without it. Let’s take a look at some of Philip’s ideas from his post, Condensers For Live Use.

There are two main reasons that most sound engineers prefer dynamic mics for live sound:

As for feedback and bleed, it’s all a matter of what the specific microphone is designed for, and how well it is implemented. Both are entirely controlled by the frequency response and polar pattern (directionality) of the mic, and especially the polar pattern across the frequency response. Most people look at polar patterns at 1K, which is in the middle of the mic’s response; but for feedback control the microphone really has to have the same off-axis rejection all across its response range. However, the polar pattern is never the same at all frequencies (except for a ribbon mic’s figure-8 pattern). Almost always, the high frequencies have worse directional control – and it’s usually the high frequencies that are the most problematic for feedback. Taming the off-axis high frequency response can be done through acoustic adjustments to the capsule and careful design of the headbasket, as well as controlling overly-hot high frequencies in the overall EQ of the mic circuitry. I make all these adjustments in my mics, and they have gain-before-feedback that is directly comparable to common stage dynamics like a Shure 58 or an Audix OM5, even in tough acoustic environments.

So it turns out that frequency response and polar patterns have more to do with controlling bleed and feedback than the dynamic/condenser characteristic. You could just as easily have a dynamic mic with poor pattern control at high frequencies as a condenser mic.

[U]sing mics not designed for the extreme feedback rejection needed on a live stage can be problematic. Many modern LDCs have a quite hyped high end that can be beneficial in the controlled environment of a studio, but on stage it not only makes feedback control difficult, it doesn’t sound very natural.

So, why use condensers?

The big advantage of condenser mics is their sound. A well-built condenser capsule is inherently capable of a smoother response through the full frequency range than a dynamic. This is simply due to the physics of their construction. The moving part of a dynamic capsule, which is driven by the sound in the air being captured, must have much more mass than the diaphragm of a condenser capsule. It will be much more difficult to make it respond to high frequencies, and it will have severe resonant peaks and valleys at various frequencies. A good dynamic capsule is very carefully designed to add a whole series of these acoustic resonances together, which combine to give a fairly smooth response. But it’s still inherently more irregular and “peaky” than a condenser, and less responsive at very high frequencies. Worse high-frequency response is the same as saying that it reproduces transients less accurately. There are certainly some fantastic-sounding dynamics out there – many of which are designed for the studio and are no more appropriate on stage than a U87. But at any rate a dynamic capsule is a complex mechanism engineered to work in a specific microphone body and cannot very effectively be transplanted and modified, whereas I can control almost every aspect of the sound of my condenser mics.

This brings me to my final observation: when I was in school I learned that because dynamic microphones reproduce transients less accurately, as Philip states,  they are more forgiving and therefore helpful for inexperienced vocalists. In the interview, Philip disagrees. So, what is your experience? Comment below.