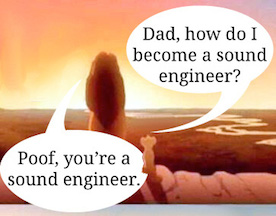 The truth is, anyone can become a sound engineer.

Getting your foot in the door feels like the easy part because if you show up at the right time you could get a job immediately with no prior experience. The hard part is sticking with it and moving up.

Being a sound engineer is hard; lots of people want to mix the biggest festivals, but only a small number make it to that high level. You could say that those people are naturally better engineers than the rest of us, and maybe they are, but I think a bigger truth is that they have superior emotional intelligence and work ethic.

So how do you harness your own emotional intelligence and work ethic to set professional goals and find success? Let’s take look at Dave Swallow’s article How To Become A Sound Engineer, which asks these two questions: 1) Why do you want this job?; and 2) What do you crave?

Why do you want to become a sound engineer?

More specifically, if you love live music and crave the emotional thrill of experiencing it with a group of people, then you might make it. But those moments of musical euphoria can be few and far between. You’ll work with bands you dislike. You’ll work on corporate events with no music. In our interview, Swallow says that he doesn’t even go out to shows anymore. I’m the same way. Even when you start out with the craving, it weakens over time and your interests change. How do you maintain that drive?

Answer: Through an interest in technical proficiency and the pride of a job well done.

Part of the reason I currently take lots of corporate work that I would have declined in the past is that my craving shifted; where I used to want emotionally satisfying music, I now crave the personal satisfaction of a job well done. Even if from the outside it appears that the event is falling apart, I pride myself in remaining calm and not losing my shit. This is both a necessity for maintaining sanity and also creative problem solving.

I’ll argue with Swallow on his second point though. I’ve never had anything but respect and support from my colleagues. We look out for each other and help each other out. That being said, I’ve never worked on a top-tier concert tour, so I believe him if he says that the competition is bloodthirsty. 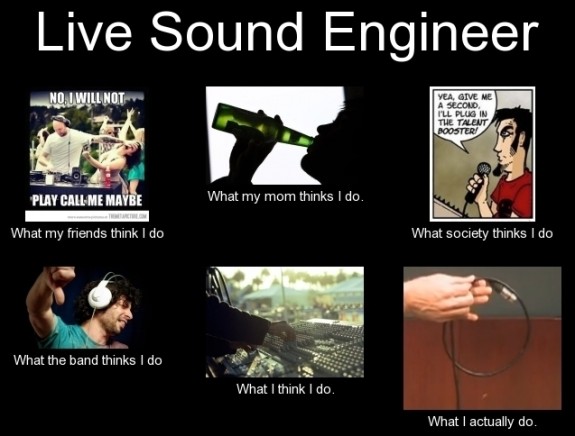 What do you crave?

The key to my own success is already written in the prelude and introduction in the book. And what you will find in there is only that I had a dream, and I believed I could do it. I wasn’t always able to get a job as a sound engineer at either end of the multicore. I had many different jobs in the industry including tour and production managing, driver, and merchandiser, and most of the time these jobs were doubled up even tripled up. I’d do anything, just as long as I met people. -Dave Swallow

A lot of people get depressed on tour. I know, I’ve been there. Being deprived of your normal network of relationships and habits is a great emotional challenge and that no one thinks about. While I was battering Dave Swallow with questions about how he deals with the shitty parts of being a sound engineer, the most important (and understated) thing he said to me was: “You can get stuck up your own ass, but as a sound engineer your job is to make it sound as good as you can. What are you going to do? Moan about it or get on with the job. I don’t see any point in getting stressed about it. It is what it is. These things happen and it’s part and parcel of being on the road. Things will go wrong. If you stress about them, you’re not really doing yourself any favors or anyone around you any favors, so just chill.”

That didn’t really sink in until the second time I listened to his interview, but it’s so important. I often get upset about the conditions of the job and the state of the industry, but getting upset doesn’t help anyone, and it’s a killer if you want to keep doing show. Anyone can get a job as a sound engineer, I promise you. Getting your foot in the door is the easy part. It can happen by accident. Sticking around is the hard part.

I really like this thought: “I’d do anything, just as long as I met people.” Swallow’s first tour was six months of unpaid work. Are you crazy?! Yes and no. Networking is the most important thing in our industry. Swallow repeats several times in our interview how important it was that he “got on” with his colleagues, both crew and artists. Swallow got that first tour after working at a music venue for six years because a local band liked him. I got my first concert tour with the band O’QueStrada because they liked me (and the fact that I would let them do crazy things with microphones like distance group miking in a tiny venue). 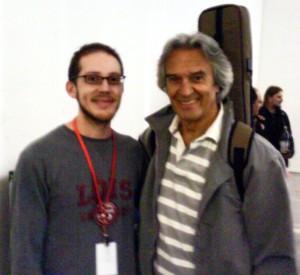 The “I’ll do anything” mentality does not just mean painting floors and making coffee, it’s also staying open to opportunities in live audio. In concert sound there are a lot more sound engineers at work than just the FOH engineer. The stage monitor engineer, the microphone tech, the stage hands, the system tech, the audio production manager, and the live recording engineer are all equal contributors to high production quality, and each position has its own set of challenges and benefits. For example, the stage monitor engineer has a far more personal relationship with the artists during the show than the FOH mixer. Once I had the opportunity to mix monitors for John McLaughlin and his band. Imagine how cool it was that everyone on stage, including McLaughlin, had to learn my name!

Every time I go to see my favorite band, Sigur Rós, I go up to the FOH engineer after the show and ask him how he got his job. He always says the same thing: “Oh, they just knew about me from other work I had done.” In college I used to read every TapeOp Magazine from cover to cover, desperate to deconstruct the sound engineer’s career path. It was always a let down, because there is no step-by-step method. Why? My guess is that the industry just isn’t that developed yet. Think about professions with well-defined career paths and guidelines. They are older and more organized, like the medical and legal industries.

This industry is still very young and, as such, is constantly changing. Just remember that if you want to make a career out of it, you must be professional, responsible, and courteous at all times. -Dave Swallow

Swallow’s career story isn’t complicated. He met someone with connections, asked for help, did well, and one thing led to another. The impressive part is that he stuck with it through all of the shitty parts of the job. Sure, he works with celebrities and great artists, but that shine wears off after about 500 miles of touring. Hear Swallow’s career path starting at 35m40s in the interview below.

Hey you, yeah, you there reading this. What drives you to continue to be a sound engineer? Comment below.

For more on career paths, read the Education chapter of Sound Design Live: Build Your Career As A Sound Engineer.