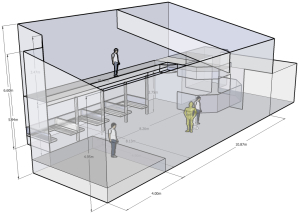 Are you ready for over an hour of on-the-job training on sound system design for small venues with one of the most experienced sound system technicians in the world? Yeah you are!

In this episode we cover:

Q: What’s the approach in sound design for venues with bad acoustics that are very reverberant? I have mixed in these places and I must say that I’m trying hard to forget the feeling. It is very often the case that the owner of the club has spent money buying a decent sound reinforcement system, but then doesn’t care about acoustics. Or, there are cases when a concert is produced in some kind of multipurpose venue (which is normally a warehouse) and you are expected to create great sound. Would it help to try a more “distributive” approach.

Q: What about using the Haas (or precedence) effect in sound distribution? Bob says that delaying sound systems further then the first arrival of direct sound will mess with the phase, but what about spatial feeling?

Q: I mix a lot of great bands at a student club. Capacity is about 300-400 people. It has a balcony and under-balcony space. It would be great to have Bob’s opinion on how to distribute the speakers because this venue is part of the Faculty of Electrical Engineering and Computing and some students (volunteers) in the club are studying in the Department of Electroacoustocs so they are hungry for knowledge (as I am). 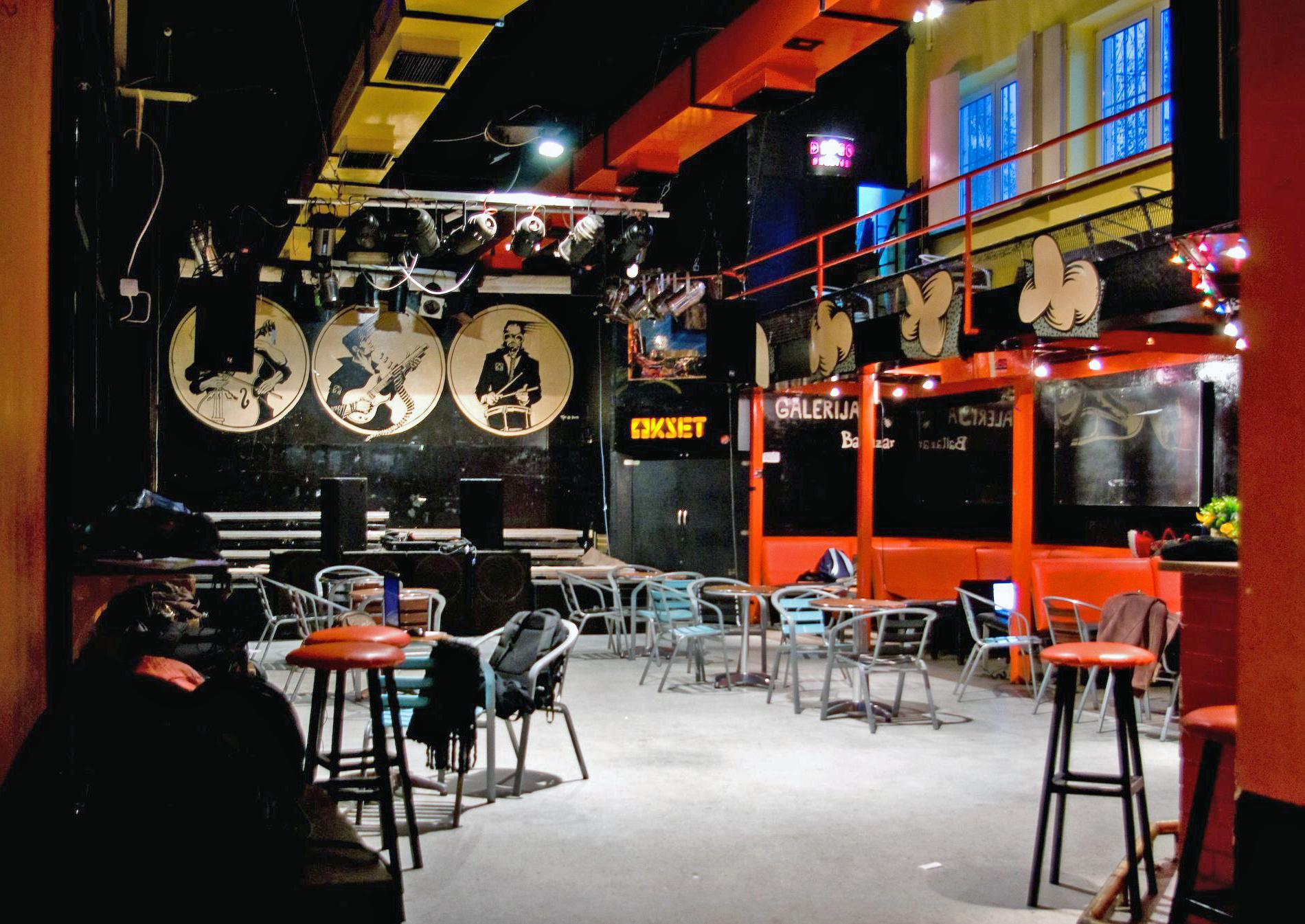 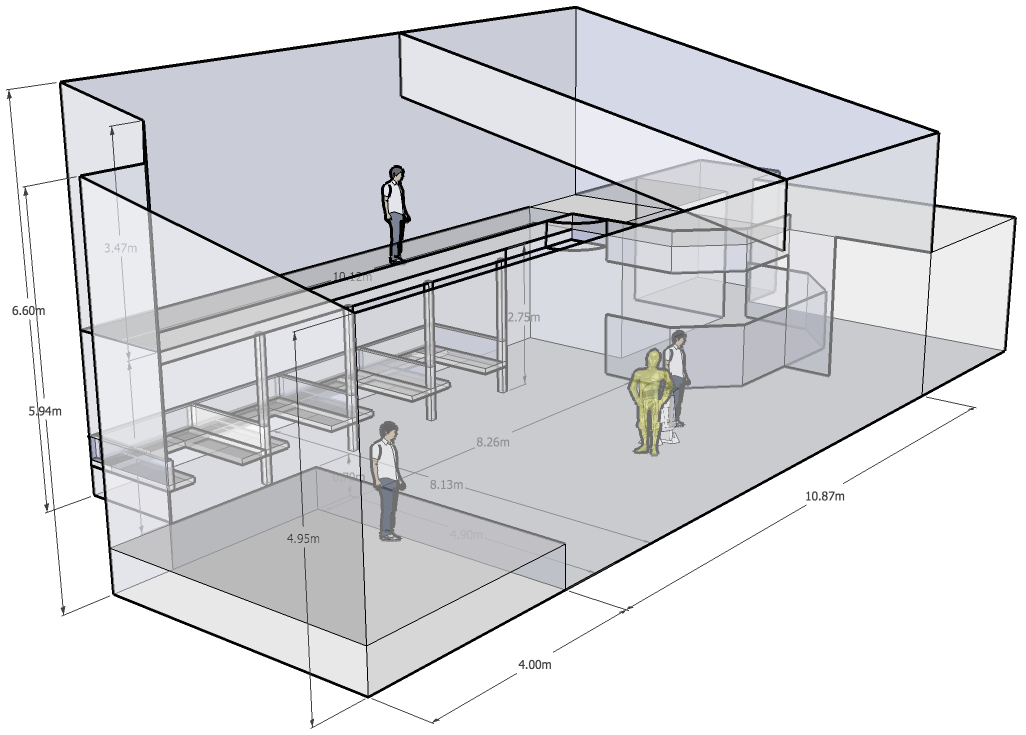 Sound system design for a rock show with six actors on close-mic’d wireless, and a band of piano, bass, drums, violin, and sampler in the stage-right wing.

I really wanted to fly speakers over the stage, but in this space it’s not going to happen (no roof infrastructure at all, not even for lighting) so I am resigned to two speakers on tall stands at the sides, angled in and tilted down in an attempt to get an even coverage. Based on the basic rule from Bob (summarized in your earlier article) of “back row on axis at distance 2D, front row at bottom edge of coverage at distance D”, I think it’s close enough. In this case, with 90×60 speakers, it works out to ~9′ up, 15 degrees down, and about 25-30 degrees in to avoid the hard side walls. 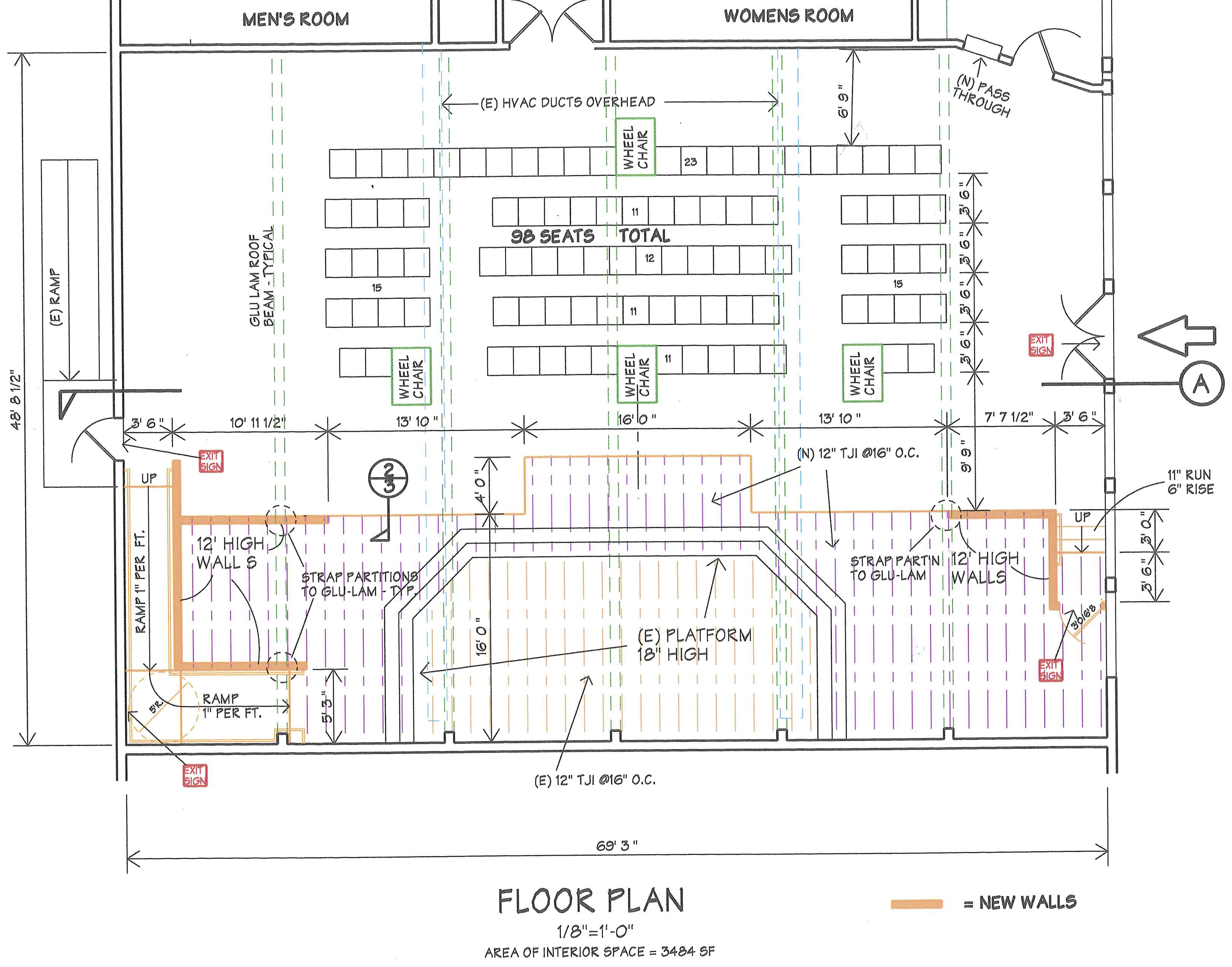 I am in the process of redoing a PA in a 650 seat worship room and have been trying to find the best placement for the subs and mains. The stage is in one corner with mains directly above the steps currently aiming at each aisle.

The center speaker has moved slightly off center and the x-over between the mains is in the middle of seats. I have stressed the concern of rearranging the seats so the x-over is in the aisles.

I can rehang, reposition, and the speakers can be visible. My thought was to flip the mains over so the horn is at bottom to get past the projectors. EV has seen the room and suggested that, too.

Here is the info of our current set up, along with photos and drawings of the room. 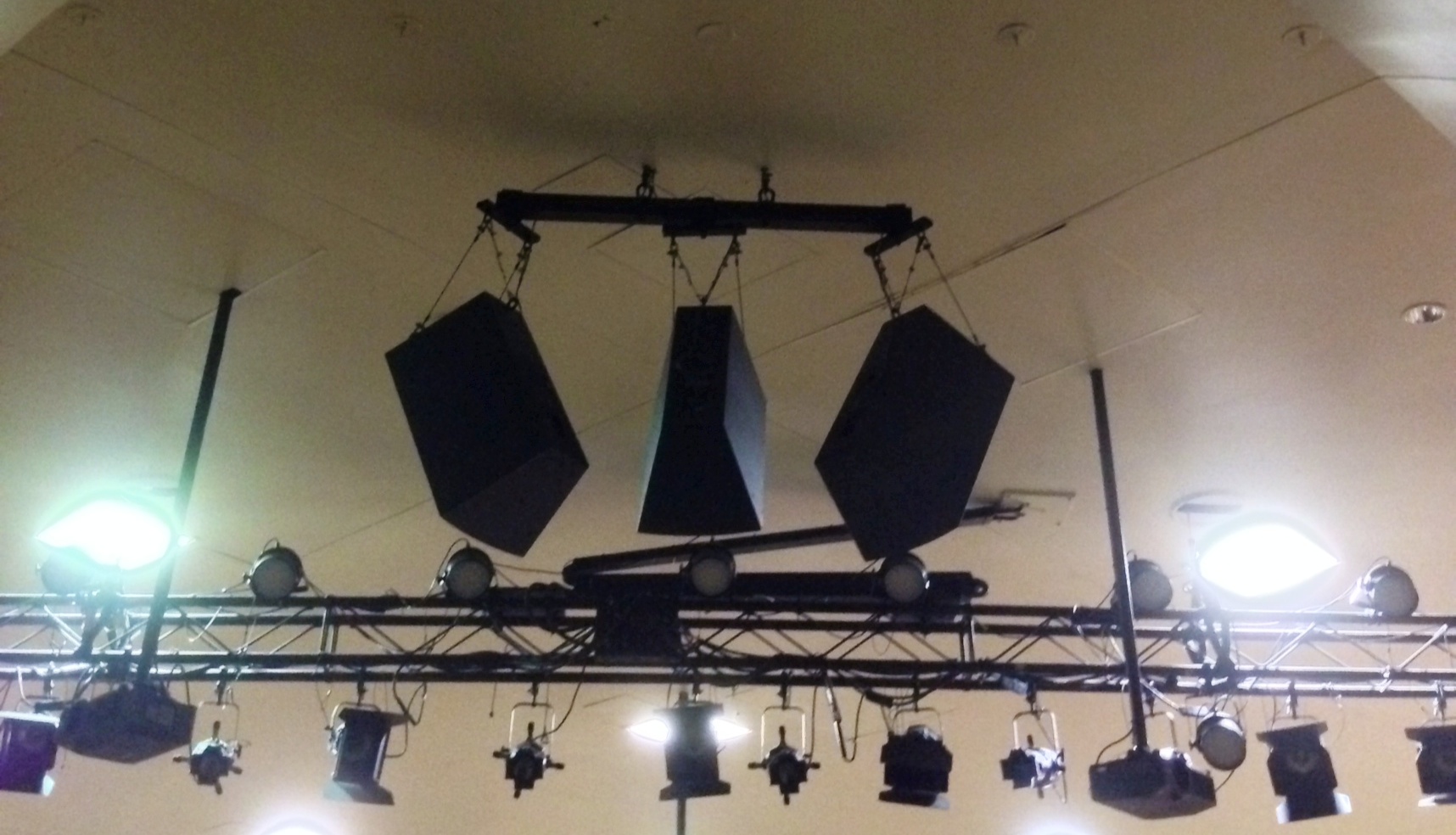 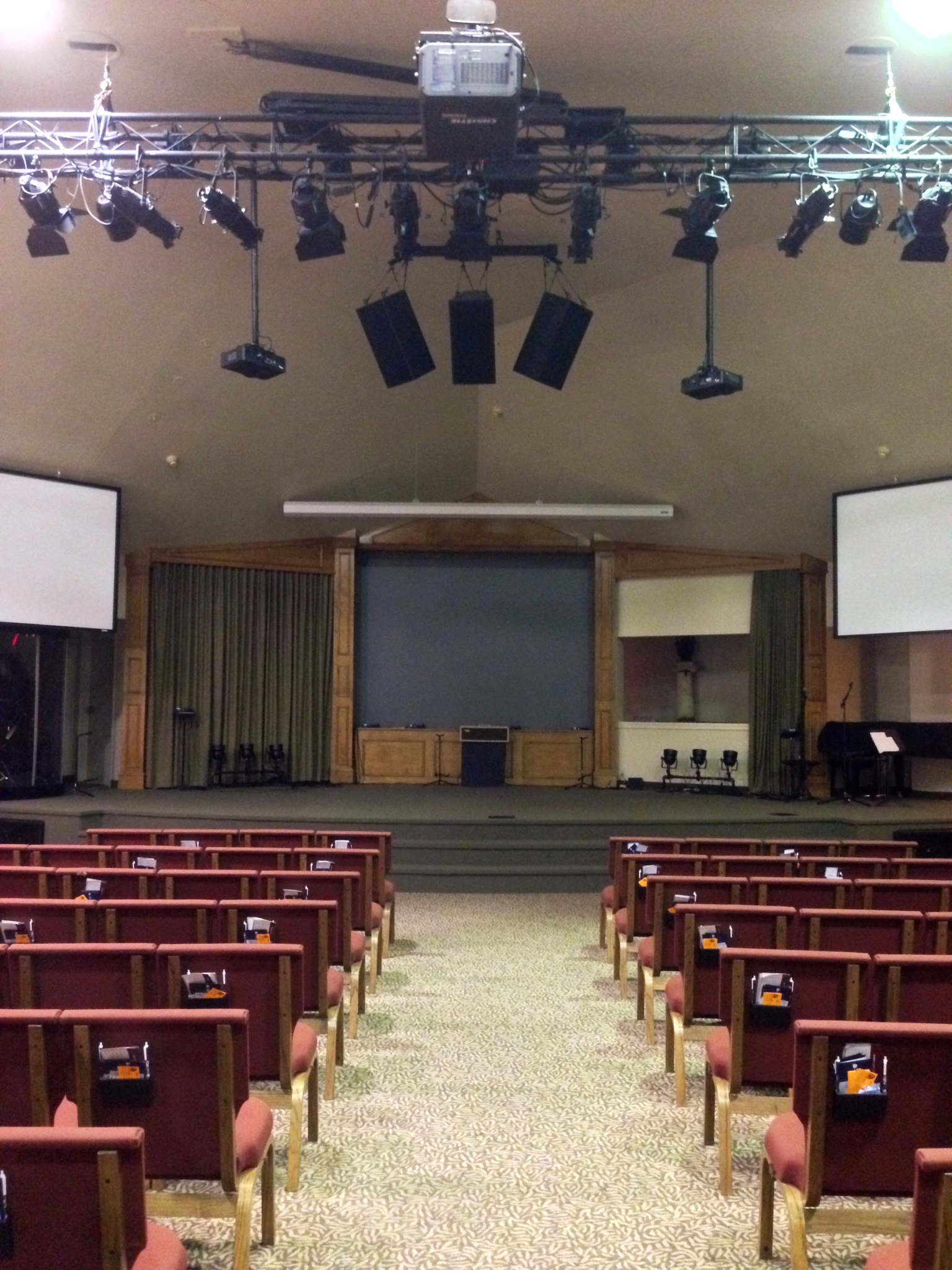 Q: When is the next update to SIM III coming out? It’s been a while.

Q: I have a theory that if I use the same model of microphone on every input and the same model of loudspeaker on every output, the sound will be more even and smooth because in the interaction between microphone and speaker there is only one frequency response instead of 12 or more if I use the typical 4-6 types of microphones and speakers. Do you agree? Does this work in the real world?