I have often heard the advice: Avoid doubling up your crossover filters.

Most modern speakers come pre-baked with high/low-pass filters. If we insert an additional filter in our output EQ near these native filters the acoustic result will be steeper than either of the filters alone.

The danger is that we might already be planning a very narrow unity crossover between our main and sub and then be surprised when the magnitude looks like a brick wall and the phase like a pinwheel.

I’m not great at spotting these shapes, yet. To help myself practice, I measured a bunch of different crossover filters and stored them in Smaart.

Now I can compare these filter measurements to my acoustic measurements to make sure the slopes actually ended up where I wanted them. For example, here’s an alignment using Linkwitz-Riley 24dB/oct filters at 100Hz.

Comparing them to their corresponding filter measurements, it looks like I got what I paid for.

Going over some of my other previous alignments I did find some asymmetrical filters. In this alignment it looks like I ended up with a combination of 36dB/oct and 48dB/oct filters.

Here it looks like I got a 48dB/oct and a 24dB/oct combination.

Identify crossovers by measuring your DSP

You can measure your output EQ by making it the SUT (system under test). In Smaart, set the REF input of your transfer function to a loopback cable and the MIC input to the output of your DSP.

Store your trace and compare it to your acoustic result. Do they match?

To speed up the process, I already measured 80 common filters for you. Download them here. Drag them into your list of traces in Smaart.

Most of the filters are set to 80Hz so you should be able to accommodate many slopes with a little trace offset. I also measured all of the Linkwitz-Riley filters at 100Hz. If none of those match, you’ll have to measure your own.

We don’t normally think of a spectral crossover as having bandwidth, but it does have a clear area of interaction. This can be clearly seen if we load the traces into Phase Invaders.

Notice that the pink Sum trace has a clear starting and ending frequency. Those of you familiar with Bob McCarthy’s summation zones will also be familiar with this concept:

Let’s look at some example bandwidths.

This leads me to the following conclusion:

Assuming your filters are symmetrical, you could use the following shortcut:

The steeper the slope…

Does it work in the field?

How to measure crossover filters in Smaart without an external DSP

Have you learned to identify crossover slopes in the wild (in Smaart)? How did you do it? 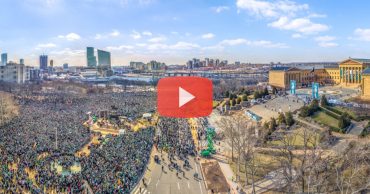 In this episode of Sound Design Live I talk with Chris Leonard who is Director of Audio at IMS Technology Services. We discuss his sound system design and mix for the largest public event ever in Philadelphia covering 1 mile for the Eagles Super Bowl Parade, dealing with wide dynamic energy coming through a podium mic, and how to build relationships and get more work with Project Managers.

Yes this is a large scale event, but you’re taking the principles you already know and scaling them up. 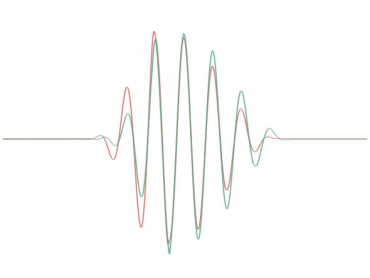 For a long time I was afraid of all-pass and FIR filters because they seemed exotic and supposedly cause lots of delay, making them unusable for live sound. Turns out this was just an excuse I was using to avoid some mental hurdles.

Do all-pass filters cause delay?

Here’s a measurement of my BLU-160. It’s an output processor from BSS.

Here’s that same measurement with 5ms of delay inserted. Let me draw your attention to the Live IR. It’s the exact same shape as in the previous measurement, just pushed 5ms down the time axis.

Wait a second. What’s going on with the Live IR?

Isn’t an APF a frequency-specific delay?

Maybe the Live IR is over represented by high frequency content. Let’s start over and switch to using a using band-limited pink noise (50-200Hz) instead for the signal generator.

I moved the Live IR window over a bit since the peak shifted when I switched to the band-limited pink noise, but I didn’t adjust the delay finder.

I see phase shift, but I don’t see delay.

Maybe we just can’t see with enough resolution. Let’s record the wavelet and look at it as an IR (impulse response).

I have one more idea. What if I record them and look at them in a wave editor.

Here are the waveforms superimposed. It looks like some delay, or maybe a polarity inversion?

But if I invert the polarity…

Instead of the same IR pushed 5ms down the time axis we see…something different; a new waveform.

This is an important distinction. Delay causes delay. It returns a copy of the original, just farther down the time axis. It does not alter the wave shape and there is no frequency dependence.

On the other hand, an APF does not cause delay. Instead, it causes phase shift, which is frequency dependent and returns a new waveform. Phase shift causes the waveform to rotate around the time axis, which can make it difficult to distinguish from delay.

It’s important that we do, though, because if I sent you this new waveform and you wanted to reverse the process you wouldn’t use delay. You would use a complimentary APF.

We’ll want to fix it with delay so that it looks like this:

We’ll fix it with a matching APF in the other channel:

Do FIR filters cause delay?

FIR (finite impulse response) filters do not cause delay for the same reasons that APF do not cause delay. Their implementation, though, may result in latency any time they include excess phase or linear phase.

This leads to a very simple rule for a minimum phase network: at a local maximum or minimum in the transfer function, a frequency of maximum curvature of amplitude corresponds to a point of inflection of phase.

Here’s a measurement of a JBL PRX615M.

Here’s the same speaker, but with an FIR filter inserted (800 samples!). Notice the Live IR. The FIR filter is entirely minimum phase so there is no processing delay.

If I were to introduce linear phase filters and make changes to the phase and magnitude independently a filter delay would be necessary and we’d some amount of processor latency.

Why should I care?

To know the right tool for the job, you have to know what it’s called. Imagine a surgeon calling out for the thingy-thing.

Trivia: Is Ø the symbol for phase or polarity? Comment below. 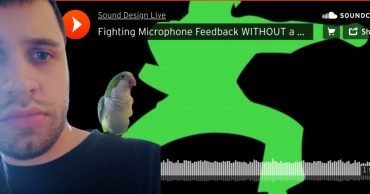 In this episode of Sound Design Live I talk with Michael Lawrence who is Document Jockey at Rational Acoustics, Technical Editor at Live Sound International, and a freelance audio engineer. We discuss lots of tips for fighting microphone feedback without a graphic EQ (and without Smaart!) while mixing stage monitors from FOH in a reverberant room.

I hate graphic EQs. I don’t use them unless I don’t have a better choice. You’re talking about 1/3 of an octave. That’s like a C to an F on a piano. 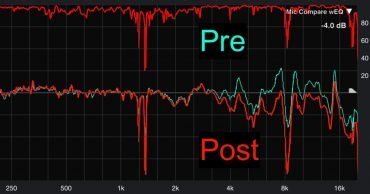 The most common microphones I use on corporate events are Shure wireless SM58, WL185 Lavalier, and wired MX418. I created three EQ snapshots using a mic compare measurement in Smaart for a more transparent starting point.

What is a mic compare measurement?

To do this, first position the mics so that their capsules are as close as possible to each other. It’s often easiest to place them on-axis with each other with the source at 90º.

Start the measurement and signal generator in Smaart.

On the mix console, hit solo on the mic channel that you want to measure (sending it to the monitor buss), flatten the EQ, and turn up the monitor output until the measurement trace in Smaart centers around 0dB. For better data on global trends, create an average from several mics like I did.

Adjust the channel EQ to your satisfaction.

Keep in mind that many (most?) microphones include purpose built non-linearities like helpful EQ enhancements. Think every kick mic you’ve ever used.

Here’s an RE320 I measured. I chose to make no EQ changes because I listened to it in headphones and the room and it sounded great.

Here’s the pre and post EQ measurement for the SM58.

And here’s the EQ I settled on after listening on a show. You can download all of the snapshots here.

Here’s the pre and post EQ measurement for the 185 capsule.

I couldn’t find the manufacturer’s specification. If you have it, let me know.

And here’s the EQ I settled on after listing on a show. You can download all of the snapshots for X/M32 here.

Here’s the pre and post EQ measurement for the MX412.

I couldn’t find the manufacturer’s specification. If you have it, let me know.

And here’s the EQ I settled on after listing on a show. You can download all of the snapshots here.

Have you tried a mic compare measurement? What were your results?