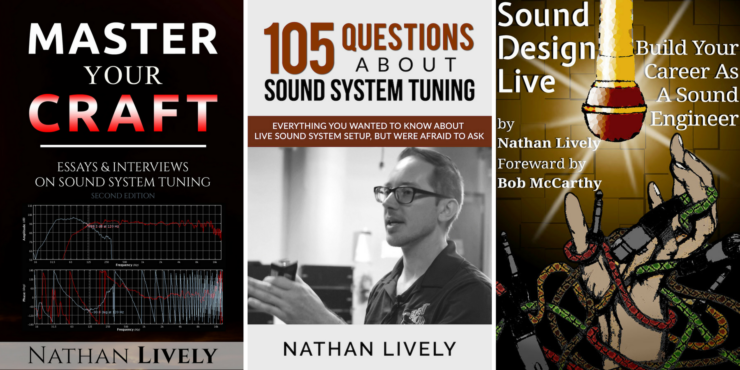 Sound Design Live: Build Your Career As A Sound Engineer

Based on sound engineer/designer Nathan Lively’s widely-followed podcast, Sound Design Live compiles two years’ worth of interviews with the leading innovators in concert, theatre, and corporate production in the U.S., Canada, and England into a succinct eBook which provides top-quality industry experience to individuals who are passionate about building a career in the audio industry. Go inside the world of professional audio and read insightful personal discussions about the technical and mental challenges faced by the everyday sound engineer.

Nathan Lively has produced the widely-followed podcast Sound Design Live since 2012. Lively’s podcast speaks to the ambitious audio engineers of the world, inviting them to consider new ideas and offering advice for success. This book contains important information that cannot be found in trade publications. As Bob McCarthy, keynote speaker at this year’s Audio Engineering Society’s 50th Conference On Audio Education, author of Sound System: Design And Optimiation, and Director of System Optimization at Meyer Sound, notes in the book’s forward, “Nathan’s choice of speakers and topics provides a mix of information and experiences that I have not seen collected in one place. The viewpoints are refreshingly honest and free of the laundry lists of gear that characterize 90% of words written about this field.”

Sound Design Live‘s eponymous podcast has over 37,000 listeners worldwide and features interviews with Broadway sound designers, internationally touring sound engineers, and top live-event producers, as well as innovative software and hardware inventors. Through Sound Design Live, readers are exposed to a new work ethic that will deepen their own journey and bring about positive change in the world of live events and the performing arts. Nathan Lively has a gift for distilling keystone actions and ideas from the larger subjects of creative technical work and career path. He does all of this in an effort to document his own professional education, and thereby raise all boats in the pro audio sea.

Lively lives in Oakland, CA where he works regularly on corporate and concert events, online content strategy, and tries not to take any of it too seriously.

This is the book that I needed in college when I was trying to figure out what to do with myself, unaware of the many opportunities and paths available to me as a sound engineer. This is the book of fresh ideas, reminding me of all the creativity I can bring to the job, that I needed when I started to get burned out. And this is book that I need now, to create a sense of community in an industry that can feel lonely and under-served.

I have a passion for audio and have worked hard to find a place in the industry. Along the way I have talked to as many sound engineers and sound designers as I could, and in 2011 I began documenting those conversations in the form of a podcast. This eBook includes the best parts of those podcasts, with great information on audio technology and valuable advice on education and jobs. You will learn:

From the Foreword by Bob McCarthy, Author of Sound Systems: Design and Optimization

The voices in this book have vastly different viewpoints, passions, and experience. If Nathan had brought them all together in one room to discuss audio, there would be at least as many passionate disagreements as points of concordance. Here is a collection of assembled wisdom and experience that I believe will open up your mind to how you can expand your role in the audio professional network.

Improve your confidence and consistency, get more freelance work, and have more fun as an audio engineer.

The audio industry is undergoing a quiet revolution. Meeting audience demands for “magic sound” is getting harder every day, the cost of producing live events is going through the roof, and some of the smartest sound engineers are already changing their methods, or struggling against the tide. But as scary as this is for some people, there are many sound people who are very excited about it – because when things change, they bring big opportunities for the people who are paying attention. The big emerging opportunity is in sound system tuning, allowing anyone to tap into the power of minimum variance design principles, to create consistent results night after night and venue after venue.

In this short and easy read, you’ll learn how this opportunity is reshaping the audio industry, which is currently separated by two contradictory paradigms: the “golden ears” paradigm, and a paradigm of science. This is unsustainable, and the growing gap will drive many sound engineers into the ground, and create great opportunity for those who are ready to embrace the better way of doing audio, and serving their clients. Get started on your personal road to more confidence and consistency in your work with sound system tuning.

Over the last 16 years I have interviewed over 60 audio industry leaders about the most important skills and tools to maximize any sound system in a corporate ballroom, theatre, or concert arena, while at the same time building a successful career in 8 different cities across 3 different countries. This book offers a distillation of the most important lessons I learned along the way about sound system tuning for live events.

Everything you wanted to know about live sound system setup but were afraid to ask.

With a foreword by Darryn de la Soul

Insider secrets to quickly and effectively maximize sound system tuning in any room.

A two-day online training and networking event for live sound engineers and the pro audio community.

Review copies of all ebooks are available. Please contact the author.

Nathan Lively is a professional sound engineer, educator, and entrepreneur based in Minneapolis, Minnesota. Over the past sixteen years he has lived in Austin, New York City, Lisbon, Bratislava, Nairobi, Berkeley, and aboard a circus train, and has worked at recording studios, concert venues, theatres, hotels, and outdoor festivals. He started his podcast, Sound Design Live, to find answers to questions that weren’t being satisfied by pro audio trade magazines and books. Since then the podcast has been downloaded 369,468 times and grown a reputation for its fun and insightful interviews on professional audio.

As a sound engineer, Lively has worked with John McLaughlin and the Ringling Bros. Circus and has toured as far as Macau. As a sound designer he has been recognized by the San Francisco Theatre Critics Circle with Excellence In Theatre Sound Design. As a musician, he has performed at SXSW with the internationally acclaimed musical group Zé Dos Frangos.

Nathan Lively has over sixteen years of experience as an audio engineer and a strong music background in performance and composition. He has served professionally as Sound Designer, Sound System Designer, Lighting Designer, FOH/Stage Monitor/Recording/Mastering Engineer, Composer, Musician, and Director of Artist/Venue relations in three different countries and venues ranging from office buildings to large-scale outdoor music festivals. He speaks Portuguese and limited Slovak and is familiar with a long list of software and hardware. Lively has a B.F.A. in Music and Technology from The City College of New York where he received the Irani/Summerfield Fellowship and founded a campus chapter of Amnesty International.

During his first year in the San Francisco Bay Area, he was awarded the Excellence In Theatre Sound Design from the San Francisco Bay Area Theatre Critics Circle for Clue with Boxcar Theatre. He continues to pursue his passion for audio by working in theatre, concert, and corporate settings and by publishing interviews and articles on sounddesignlive.com. He strives to be an exceptional Sound Designer, bringing innovation, creativity, and professionalism to his work.

Lively spent his first year back from Europe in 2009 in Austin, Texas, working in marketing for a software startup, Clubstr.com. The following year he achieved one of his longtime goals by creating a computer-based wireless mix system to be integrated into the sound system of a national theatrical tour.

Lively moved to Bratislava, Slovakia in 2008, where he spent a year studying Slovak and contracting for large outdoor production companies. Being one of few English speaking sound engineers, Nathan was afforded many opportunities including working with well-known musicians John McLaughlin and Peter Dvorský. During this time, Nathan was introduced to the work of Bob McCarthy through his writing and seminars, and felt drawn to focus his career on Sound System Design and Optimization.[/one_half]

The previous two years in Portugal found Lively working for various artists as a recording or FOH Engineer. Much of his time was spent with the outstanding musical group, O’QueStrada. He toured extensively in Portugal and as far as Macau. The group’s creators founded a project called Tasca Móvel for which Nathan was contracted to design and build lighting for an outdoor cabaret.

Lively moved to Lisbon, Portugal in 2003 to broaden his work and cultural experience. Once he became fluent in Portuguese, Lively found employment at Galeria Zé Dos Bois where he remained for a year and a half. He was responsible for the audio/video needs of the gallery, concert space, and theatre. After leaving the gallery Lively worked for a year at the National Theatre of Portugal Dona Maria II. He operated theatrical productions in the theatre’s three venues and performed daily maintenance and special projects.

While in NYC, Nathan was exposed to many opportunities, including a studio internship at The Magic Shop and two Sound Design positions for off-off-Broadway theatre. Two Little Indians gave him the chance to work with well-known writer/director Lee Breuer while Expat/Inferno earned Best Production at the 2003 Fringe Festival.

Before moving to NYC, Nathan received a presidential scholarship to study Jazz Guitar at the University of North Texas in 1999 with Fred Hamilton. It was there that he was first introduced to professional recording, and after a summer internship at the recording studios of Asleep At The Wheel in Austin, Texas, he committed himself to a career in audio. 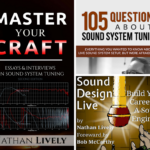 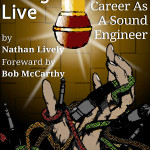 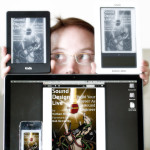 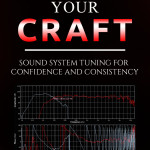 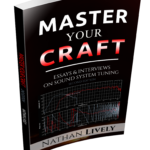 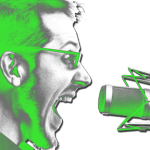 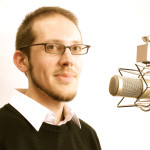 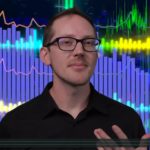 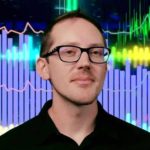 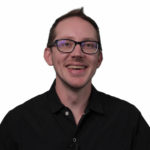 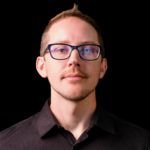 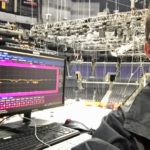 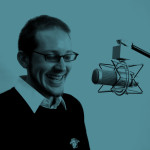 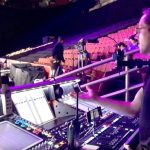 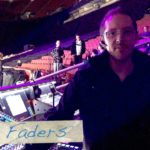