It doesn’t matter how good a monitor engineer you are. If you have severe halitosis you will not be asked back.

Things that I learned/re-learned from watching Mixing Monitors from FOH on Soulsound.

I’ve been a member of Soulsound for 2 years and 7 months. Their videos are great quality and watching them always makes me want to go back and redo all of mine.

I learned a lot from watching this masterclass with Justin Grealy. He is very thorough and it really motivated me to up my game and deliver better service to the clients I work with. Instead of minimal effort to get the job done, prepare for every possibility and make every comfortable.

The only thing missing from this class is practical work with a band on stage, which would make a great part 2 (hint, hint).

How I do things similarly

If you have an analog console, Y-split at least the vocal channels.

I’ve done this technique a couple of times. My first question is always: What amI going to do differently to the monitor split compared to the FOH split?

One of the biggest problems I have in small concert venues is that the mix in the room can be ruined by the LF from loud stage monitors. At first you think, “Who cares, crank it up till their ears bleed if they want it.” But remember, every speaker is omni directional at some point, not to mention reflections from the back wall. So a loud stage monitor is going to give you lots of LF into the front rows as well as the stage. One way to help mitigate that is to raise the HPF on the vocal channel to something insanely high, like, as high as you can get away with. I’m talking 350Hz! And you can get away with that by splitting the vocal channels.

When it comes to dynamics, it’s likely that you don’t want as much compression on your vocals in the monitor mix as you do in the FOH mix. In most cases, on small, loud stages, you want almost no compression so that the vocalist can hear their raw performance to improve their microphone technique. In the same way that an actor learns to “find their light,” a singer must learn to find the pocket for a consistent performance.

The more you compress it, the more you affect the way the musician “actually” plans the instrument. It’s really easy to make people over play.

A gate set correctly can also be a huge advantage in the FOH mix, but tricky in the monitor mix. Vocalists will complain at the first hint of a problem, and we could get into the psychology of that, but what’s important here is that you don’t want to give them any reason to complain. It’s like when you’re on a Skype call and it mutes everyone else while you’re talking. You’d think silence would be nice, but it’s unsettling.

How I do things differently

I live in the US.

You will rarely meet an analog desk these days.

This is an interesting difference between the US and UK markets. In the US, analog mixing consoles still hold strong, especially in small rooms and hotel AV. They are cheaper and easier to train people on. Which makes me wonder, why have analog desks disappeared from the UK?

Grealy suggests duplicating all inputs for a separate monitor mix for more control, which is ideal, but I never do that. There’s just not enough time to do both jobs comprehensively. I can imagine a situation where maybe you have some of the controls linked between layers or quickly copy and paste your settings, but I can’t imagine anyone having the patience for me to track down technical problems, setup the FOH input channels, and then setup the monitors channels for three different bands. I usually barely have enough time to do one job.

So time management is the main consideration, but hearing is another. Most venues where I’m mixing monitors from FOH are not going to include a stage monitor for me at FOH to listen to my changes. That means I’ll need to listen from across the room, on headphones, or do a lot of guessing. I might be making more problems than solutions.

I don’t use graphic EQs, especially not for system tuning.

In the video, Justin inserts graphic EQs in his monitor sends. I never do this anymore since most desks also have a parametric EQ on every output.

There are only two good reasons to use a graphic EQ: 1) ear training and 2) the war zone that is monitor world. But aren’t we in monitor land? Yes, but the reason we might want them in a war zone is the simple speed of grabbing a fader and moving it. That doesn’t work on a digital mixing board.

Check out the graphic EQ setting in the image below. It looks pretty minor. A little shaping. Maybe removing some feedback.

Then look at the shape that it’s actually creating in the measurement below. Yikes! 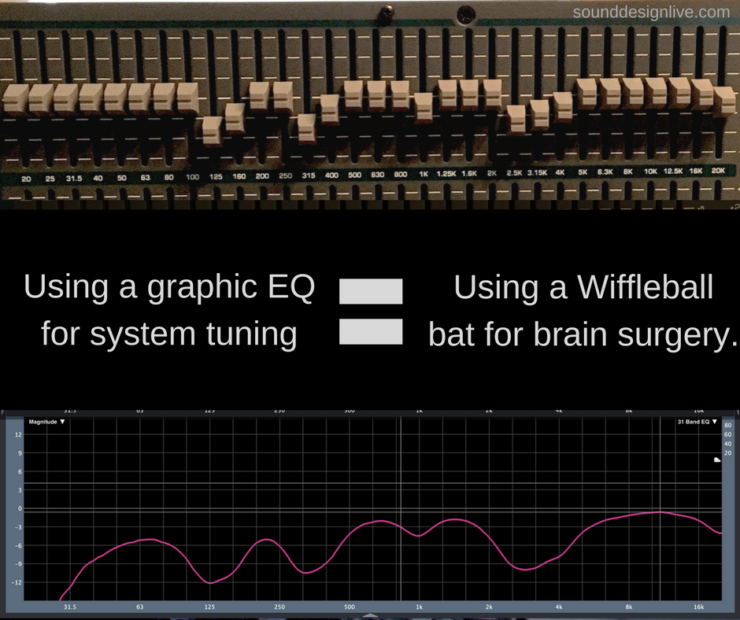 One thing I’ve never understood is the doubling up of stage monitors for the main vocalist. I mean, I’ve asked people about this. When I asked Michelle Sabolchick Pettinato about why Eddie Vedder has 8 stage monitors she said, “SPL and coverage,” which I still don’t quite understand. In all cases, why not just turn one speaker up louder or get a louder speaker?

Maybe someday I’ll work on a show like that and finally understand it.

The way Grealy uses polarity and phase interchangeably is confusing. Grealy says he is going to “check that all of the monitors are in-phase with each other.” He then proceeds to verify polarity. It’s important to remember that phase shift is frequency dependent and caused by delay in the signal. Polarity is frequency independent and has no time offset. So if we are checking phase we are going to need a delay line or physical offset and if we are verifying polarity we just need a polarity inversion switch or cable. So when Grealy says that on tour he found an out of phase cable, he basically discovered a time machine.  That being said, I do appreciate his quick and dirty method of listening to stage monitors in pairs. Nice!

Grealy’s explanation of pink vs white noise is a little confusing. Although white noise is statistically equal level over the frequency range, we perceive it as spectrally tilted toward the high frequencies because our ears respond on a logarithmic basis and are more sensitive in the high end. Pink noise is filtered white noise, attenuated at 3 dB/octave, to sound more even to our ears.

Some people cheat and use an analyzer. I use these [pulling on ear], because I find that they work rather better.

You didn’t think I was going to let Grealy bash audio analyzers and get away with it did you?

Grealy goes on to say that an audio analyzer can mislead you, but fails to demonstrate how, which seems like fear mongering. There is enough misunderstanding about audio analyzers as it is without Grealy turning it into a pissing contest. An audio analyzer is a tool to supplement the two audio analyzers you already have attached to your head, not to replace it.

Things I Want to Test

If you put the stage monitor on a beer crate, do you lose all of the low end?

I would test this by comparing measurements of a stage monitor on the stage and 2 ft up on a stand.

How far apart can I space two stage monitors before the bass player complains?

I like Grealy’s suggestion to keep two monitors as close as possible if you want LF coupling, but I wonder where he came up with 30cm? Two LF drivers spaced 30cm apart would give you coupling up to 755 Hz since the wavelength of 755 Hz is 45cm long and 2/3 of that is 30cm. But the fundamental range of a 4-string bass goes from about 40Hz to 400Hz. So if all you need to do is support the fundamental range, then you can get away with a wider displacement, up to 58cm. Maybe Grealy is counting the overtones, but that would go way past 755 Hz.

I would test this by pulling stage monitors apart until the bass player complained.

Are you a person that listens to business books at 1.3x speed? I am. Grealy is very well spoken, but there are enough pauses and “uhs” that I installed the Vimeo repeat & speed extension for Chrome so I wouldn’t get distracted.