Stephen Pavlik walks me through three common antenna placement mistakes and how to fix them.

This transcript was generated automatically. Please let me know if you find any errors.

What are we doing here, Stephen? All right. So I’ve been talking to quite a few folks about some of the wireless issues they’ve been having and just questions and concerns. And many of them have mentioned some advice on antenna placement. And really there it could be so many ways to to express this and then make diagrams. So I figured we’d pick, you know, maybe three examples that could really help us out there.

Pretty general. But give you a good idea of just the baseline of where to put antennas.

OK. So these are some common things that you have done wrong or you see other people do wrong. And we can kind of show here with graphics. But yes, I have done them wrong and I see it done wrong. Karlovy. OK. So my hope is that in infographics should be fairly self-explanatory. So if you have the patience for it, I would love to see what I already understand.

And then maybe ask questions about what I don’t understand so far. Yeah. Let’s give it. OK. So I don’t know what all these shapes are. But I know that these are two antennas and the title here says IEM TX and mic RX. So I understand that to being in your monitor transmitter and microphone receiver. Is that correct? So far, absolutely correct. OK. So what is this crazy looking into now on the left here?

That’s the I am transmitter.

So that is a very common antenna type that we use for AMS. It is called a helical. And that little squirrelly little spiral there, you see, is actually what is basically shifting the wave to make something called 360 degree polarization, to create what’s called circular polarization, which means that if we have a pack, should have this ready area. If this is the end of your pack, that means if this if I bend over, the antenna turns sideways or it’s straight up, it doesn’t matter.

That antenna is basically shifting the way 60 degrees where it’s going to reach it at a point. So we like these antennas a lot for in-ear because of that that characteristic. Also are game, which is important when you have just a tiny little antenna to try to get a lot of signal that’s buried maybe under your skin. Signals important. So we have circular polarization to get the antenna in any direction and we have a lot of forward gain to try and push through clothing in effect.

OK. So the helical antenna makes it so that I can mount the receiver any way I want for the ear monitor. And it has lots of forward gain. And so I’m understanding from this big red X here in this big green checkmark here that this here is wrong here on the left. And this is right on the right. Correct? Yeah. Absolutely.

And so let listening about the first second. So we mentioned a lot of fourth game, which means we have a lot of power coming from this guy. And so then we think about our microphones that are pretty sensitive because we’re trying to pick up small signals and far away again. So if we take a look, we’ll hear something with a lot of power pointed in this direction, going that way. I put something here, tend to pick up small power.

We’re going to overload this quite heavily, OK?

And that’s going to cause a lot of problems and even know that antenna is directional and it’s supposed to have a node behind it. It’s still having some pick up. That’s not no pickup yet. There is no such thing as an infinite no. Think about it. Fifty eight with hedge with has a little bit of a in the back. It still gets out the back. But not as much as from the front. So as much as we haven’t done that back, we’re still when we’re blasting with high powered RF from behind.

It’s still kind of getting into that center. Got it. OK. So this is making sense to me. If I set these up, I should have the iron transmitter behind the receiver. So I shouldn’t have the I am transmitter behind the receiver. So I don’t blast my receiver with unwanted transmissions. Yes. OK. And some of you a lot of our comes out, do some people might say, well, I’ve done it before. It works, but it depends on a lot of things.

You could have had your frequency band was far enough down to its filter. But again, we’re always going to general practice because the minute one thing breaks in the system, that could be all it takes is destroy your signal. So we want to just follow good practice from start to finish. On. All right, so so far, this makes sense to me so I can kind of remember this setup for the antenna’s. And it looks like since we’re looking at the side here and this is like a section view, we’re just looking at these two dimensional representation here of the antennas.

Then this maybe is the same thing down here in the middle. But a planned view from the top. So now I’m looking at something similar, but from the top. Is that correct? Yes. And so this is kind of what we’re looking at here is we kind of want to get more than six feet away from any transmitting antenna. It’s similar to get into a little bit when we get to the bottom example of corporate Avey, something called the reactive Muirfield, which right around the antenna want to keep things away from it.

But we get farther away. We’re trying to do it. Just avoid the power coming out of that incentive. Again, like we talked about, the normal, there is a door and there’s a lot of direct forward direction. It’s very focused in Hilo. Cool. But it’s also radiating out the sides as well. So we want to keep transmitting it. And as a minimum six, a lot of people say 10, but a 60 can get away with.

A lot of times there’s you know, I can say I want this 20 feet that way, but in a situation that is what has happened. So I feel like six is very good, a very good compromise. You’ll be safe, though.

So, Stephen, one thing I just noticed here in the middle, though, is that these I am saying is that these El P.D.A shark fin antennas are not all the way behind the Heligoland 10 and like they are up here in the section view. So why aren’t they pushed farther backwards, like up here? That’s a very good point. And so the example we have up here is more for close proximity. So they’re not six feet apart. Yes, they do have to be quite close together.

That’s kind of the way you want it. You want to have this this arcs and the receipt and send it in the novel. Now, if you have some room to spread out, which always kept like about is a very good thing, then we can actually kind of we can play a little around a little bit with it, not be directly behind that because you’re part of a wage where in a sense you’re always using space to filter that out of the center.

So this is all good so far. So now what about this bottom part? This looks like the big red X is telling me antenna farm bad having me. You know, the receiver is also close to each other and we need to space them apart. And I’m guessing at least six inches, right? Yes. OK. Absolutely.

And like I mentioned very briefly before, something called the reactive airfield. So it’s. We asked me go to the town of Farmelo two weeks ago and set Tiger Farms. So we have these antennas close to each other, even if they’re on the receipt. What’s this? Starts getting energy and starts resonating. They can actually transfer some energy back and forth. We lose that energy between different cities. Now, if you ever frequency’s very space, very close together, that could get some unwanted signal.

This antenna than can cause interference. We’re also losing some energy. So if we space it out about six inches, six inches, around five inches is a is the reactive near-field of about 470 megahertz. So six inches. Again, more is better. But because of the constraints of the actual environment we operate in. You can’t have a corporate AV table with your receivers…

That’s why we stack them up normally. I’m trying to save space.

Because it saves space and looks pretty, but it’s not the best for RF. So, again, six inches, it’s a compromis, but it should be a pretty safe area.

And the only way to not have to do this kind of spacing would be to have an antenna splitter. Right. So then we could just have two antennas, a splitter. And those all go out to each of the receivers. Yes. And that works well because there’s isolation on each one of those ports. So everything. I mean, essentially you can isolate is no incentive at all on the topic and quite expensive. But yes. So the other way to do this is with it’s in a distro or multi coupler and two antennas.

Awesome. Well, this has been really helpful for me. This is something that I feel like I would print out and take with me, because although I understand it right now, now that we’ve had this conversation, I feel like I could pretty easily forget about this in a couple of weeks when I might need to use it. So if you’re watching right now and you have some questions about this, please comment below this video. If you have any other suggestions about intendant placement and how it’s done best and how you do it.

I would also love to hear those. My whole goal in doing this kind of stuff is not only for myself to learn more, but for us to sort of share all this information. So, Stephen, thank you. Thank you much. So, Stephen, thank you so much for putting this together. And I think you’re working on some more that we’re going to be talking about in the future, right? Absolutely. I’m quite excited about it.

And I hope everyone watching this sticks around for that part as well. 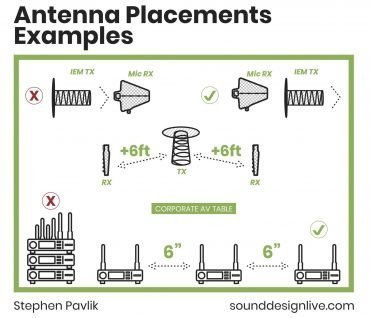