#1 – Immersive is not necessarily more complex and expensive. It is a redistribution of complexity and cost.

One of the reasons that I assumed that I would never get to work on an immersive sound system is the cost. Most events I work on struggle to cover the entire audience with mono. When you multiply that by five it seems impossible.

It turns out that an immersive sound system might actually cost the same as a traditional LR sound system in the same room. One of the reasons is that the arrays can be shorter.

What I’ve been trying to promote to productions to try to get them to do this is, let’s make a trade. You give me the high horizontal space and I’ll give you everything below it.

Kim Wheeler asked him why and he said, “I think it’s partially the efficiency.”

My understanding is that once you break apart the mix into several discreet channels, each of those channels requires less power. Imagine the headroom you would need to mix five voices into the same speaker and then how that would change if you split those five voices into five separate speakers. Instead of multiplying a traditional array by five, you might think of dividing it by five and redistributing it.

The number one reason we sell SoundScape systems is not sound quality. People spend with their eyes, so having a speaker system that is high and tight is actually the main benefit.

In a traditional system all speakers are burdened equally because they all have exactly the same signal. It’s a headroom bottleneck. [In an immersive system] the bottle neck is not the same across the system. Every speaker has a different bottleneck, which allows it to breathe and act more naturally. There’s more headroom because of that.

The speaker system is cheaper because it uses less amplifiers and less speakers, but we charge a pretty penny for the processors so now we’re back to even. It is a legitimate choice. I’m not just pushing you the new hotness.

During Nick’s presentation he showed us an example system that could transform from 32 line array elements and 16 amps channels in a traditional system into 8 point source elements and 8 amp channels in an immersive system. I’m sure the circumstances will change for every installation, but it was an eye-opening example.

#2 – Sexual harassment is a safety concern

Understanding sexual harassment and how to effectively intervene in potentially harmful situations is about creating safe spaces for our customers, clients, and employees.

Sometimes it gets pushed off to the side as a women’s issue, but it’s a safety issue at the end of the day.

Kim Warnick, Calling All Crows, Harassment in Live Music: How You Can Be Part of the Solution

What Kim suggests is to frame the conversation as a safety issue that effects everyone. It’s also good to remember that sexual harassment is a form of sexual discrimination and is therefore unlawful.

My takeaway from Sean Sully’s talk was to look at every piece of equipment in the signal chain that is critical for the show and think about what I would do if it went down.

Sean started off by reminding us of the 2017 Coachella where Radiohead’s show went down because of a console failure. He later told the story of mixing Shania Twain in Las Vegas when his main console went down. He switched over to his backup console temporarily while the issue was resolved. No one in the audience knew there was a problem. 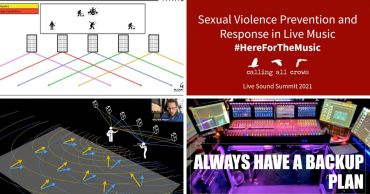